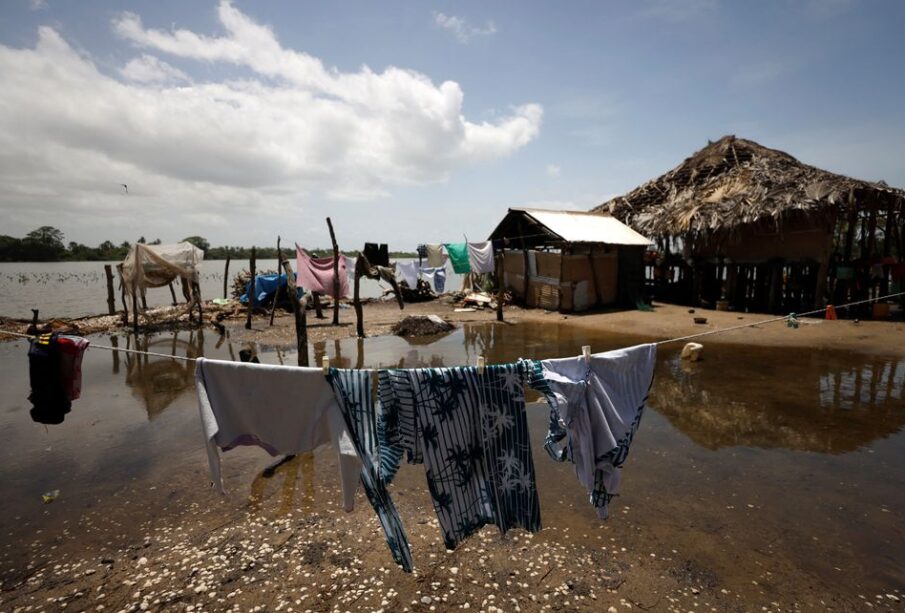 Clothes hang to dry at Diogue Diola village which is threatened by the rising sea levels and coastal erosion in Diogue island, Senegal July 14, 2022. REUTERS/Zohra Bensemra

Simple wooden structures padded with coconut tree fronds are helping residents of Diogue island in southern Senegal to win back stretches of sandy beach from the Atlantic swells that threaten much of the West African coast.

In some areas, half-submerged tree stumps and crumbling abandoned buildings show the impact of the waves – and the ongoing degradation of coastline, where 56% of West Africa’s economic activity is generated and around a third of its population live, according to the World Bank.

“The ocean was so far away that we used to hear it without seeing it,” said Angele Diatta, head of the women’s association in Diogue Diola village on the island in the mouth of the Casamance river, where the higher tides sometimes sweep through homes.

West Africa has many of these low-lying deltas, making its coastal ecosystems among the most vulnerable to sea level rise, erosion, saltwater intrusion and flooding, the U.N.’s global panel of climate scientists said in its latest report.

On Diogue, a method of driving clusters of stakes into the wet shore is helping to protect some beaches on the island. These areas have expanded by around 30 metres (98 ft) since 2019, according to the project’s organisers.

“Whenever we gain ground, we can extend the structure, add more sticks, as they say little by little the bird makes its nest,” said local primary school teacher Gilbert Bassene, who has been helping maintain the handmade beach defences.

In early July, he and the initiative’s founder Patrick Chevalier used red string and a marked stick to measure how much sand had accumulated next to one of the structures and wove dry coconut branches through its stakes to help trap more sediment.Advertisement · Scroll to continueReport an ad

These semi-permeable groynes are based on a model pioneered in Canada, where beaches were protected without accelerating sediment loss elsewhere, according to a 2002 analysis by University of Quebec scientists.

“With the little that we have, we can achieve extraordinary work,” Bassene said on the palm-fringed beach, where children had gathered to watch him work.

Nevertheless better coastal management is needed on the regional level in West Africa, where “despite the interventions, rates of coastal erosion within the individual countries continue to rise,” a 2020 study published in the Journal of Coastal Conservation found.

Communities are already suffering the fall-out.

Coastal degradation cost Benin, Ivory Coast, Senegal and Togo a total of $3.8 billion in 2017, according to the World Bank, which supports an ongoing project to relocate 10,000 people from Saint-Louis, a northern Senegalese city that spans a thin peninsula between the Senegal River and ocean.

Some people on Diogue believe they face a similar fate. “It’s not easy to admit but one day the village will have to move,” village chief Cherif Diatta said.