The Times of Earth, International Edition
0
1148 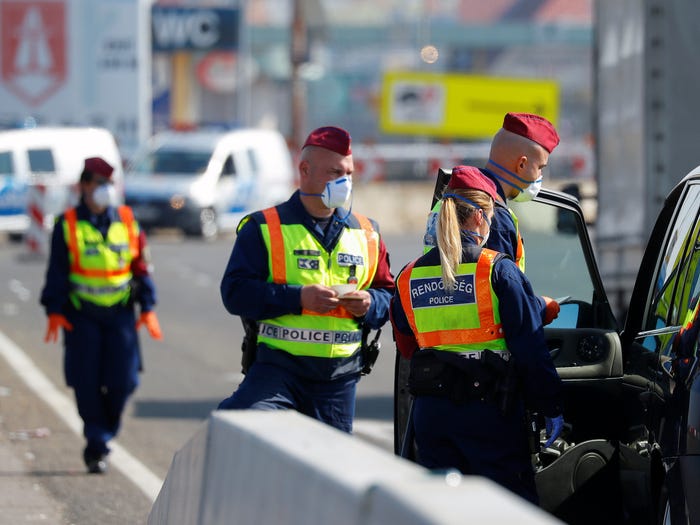 Hungarian police officers check a car while the Hungarian-Austrian border is closed, near Nickelsdorf, Austria on March 18, 2020. Leonhard Foeger/Reuters

COVID-19, A severe acute respiratory infectious virus that originated in December 2019 in Wuhan, China, is now a global pandemic having exterminated millions of people by mid April 2020, headed towards 2021. As with most viruses the Corona also has common symptoms like Cough, Fever, Shortness of Breath while there may also be symptoms like muscle or abdominal pain, sore throat, loss of smell among others. If not diagnosed and treated on time, the Corona can result in causing viral pneumonia or even multiple organ failure. Almost all Health & Safety organizations recommend certain precautions like regular washing of hands, avoiding touching articles unnecessarily, maintaining a minimum distance of at least one metre between other human beings, use of protective face masks etc.

The Corona leaves with us a lot of questions, the precise analysis of which will probably save the world from the Corona spreading further while letting us humans live as normal a life as possible.

New cases of the novel coronavirus that emerged in the central Chinese city of Wuhan in late December are being reported daily around the world. More than 154,000 people have died from COVID-19, the disease caused by the new coronavirus, while some 2.2 million infections have been confirmed in at least 185 countries and territories. More than 500,000 people have recovered to date.

The Corona originated in China, how then did it reach the rest of the world, can it fly, swim or run? As it has but become quite obvious by now, the Corona can Fly, swim and run by using the human body as it´s mode of transport. December 2019, the Corona traveled from the borders of China by housing itself in Unknowing Innocent passengers and arrived at other international borders by Air, Sea and Road. The lack of the one metre distance between humans allowed the Corona to easily spread from one person to another faster than wildfire and multiply with lightning speed.

Every day thousands of people Worldwide are being infected with the Corona some of who do not get a chance of seeing a new day, some of who spend quite a few days in Intensive Care before being let out to breathe air ( fresh air or Corona infected air, no one knows), while the others only wait to know what their outcome is going to be. Since December there are millions of people infected worldwide and over a hundred thousand people who have lost their lives to the deadly Corona.

Hospitals have no place to treat more Corona patients and many of them end up receiving treatment on the hospital floors. Doctors, nurses, administrative medical staff risk their lives to treat infected patients while policemen, firemen risk their lives in keeping the streets free of people.

How can the Corona be stopped from spreading, multiplying and returning once it is contained?

As per the recommendations and security measures of confinements wherein people are made to stay at home under the lockdown scenario, the Corona should come in control and the number of infected people should reduce on a day to day basis. Unfortunately that is not the case. The number of people infected since December have only gone up. There have been days when the Corona infected numbers seemed to be going down but only to go up again. If confinement was enough to stop the Corona why are the numbers not coming down?

BORDER CONTROL is the key to contain the corona virus and end it in my humble opinion. BORDER CONTROL here in this context means to test and control the Corona at the Borders both at the point of exit and the point of entry. During the last few months of confinement it has been statistically shown that the Corona is not equally distributed in all States of a Country. Mostly the most populated States of the Country are the ones with the maximum contagion. The simple reason to this is that the more populated and easily accessible the State is the more people use it as a Point of Entry into the Country making it the Point of Entry for the Deadly Corona as well.

Countries around the world have imposed sweeping travel bans and advisories to stem the spread of coronavirus within their borders and beyond.

If all Border Points of Exit were to check all Outgoing passengers for the Corona before letting them out of the Country and all Border Points of Entry were to test all incoming passengers for the Corona before letting them into the Country, would be a more secure way of containing the Virus. It would be like doing an immigration check. The Corona Check implies that if no new Corona cases came into the direct contact of the citizens of the Country, it would be highly difficult for the Corona to Spread as the infected people would be sent to the hospital directly for treatment. The Confinement would be in the hospitals where the Corona would be dealt with appropriately by the skilled medical staff. Confinement in the Country would gradually ease and the people could get back to living a normal life style. Without adequate Border Control even if the Corona were to be contained it will keep returning back to haunt all of mankind by using new passengers. The Corona has to be stopped and the only way of doing that is by adequate Border Control.

The Border Control would be carried out till the Corona disappeared from the planet and normality returned in every part of the world.