The Times of Earth, International Edition
0
311 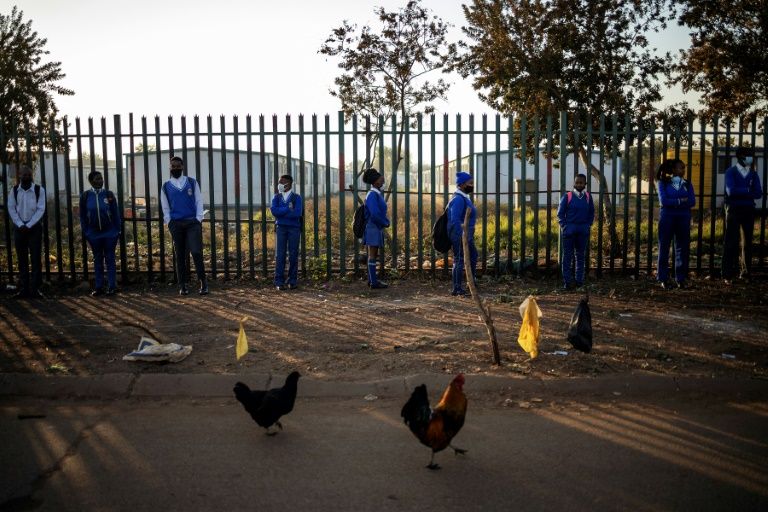 An hour before the gates opened, dozens of uniformed students wearing face masks stood silently in single file outside their schools in the dusty South African township of Tembisa.

“Have you seen how many are waiting to come in?” said Eddie Kekana, the headmaster of Winnie Mandela Secondary School, just north of Johannesburg.

“They have been longing to come to school,” he said.

Students across South Africa returned to classes on Monday after two and a half months of home-schooling to limit the spread of coronavirus.

Schools had been shut since March 19, two weeks after Africa’s most industrialised economy recorded its first coronavirus case and days before President Cyril Ramaphosa imposed one of the world’s strictest lockdowns.

As restrictions have been gradually eased, with more movement allowed and economic activity resuming, exam-year students were welcomed back to classes.

“I am very happy but at the same time I am very scared to come back to school,” said 21-year-old Lefa Ramoroka, dressed in the school uniform of grey trousers and an azure blue blazer.

“I thought I would not see my friends again,” he said.

But he expressed concern about maintaining basic hygiene protocols expected in the fight against COVID-19.

“Often there is no water at school,” he said.

The pipes are working, however, according to the headmaster Kekana, and two large tanks were available in case of water cuts.

At the entrance to the school, teachers took the temperature of each student, who answered a quick health questionnaire.

For nearly three months, the teachers have been giving lessons remotely, though doing so by videoconference was out of the question.

“Videos take too much space and too much data,” said Steve Shaku, who taught maths via WhatsApp, audio messages and downloadable documents.

But some students did not have the technology to access the lessons.

“I could not see everything,” Eliza Manasse, who lives with her single mother and siblings.

“I have only a small phone. It was challenging to follow the classes,” she said.

Other students borrowed phones from neighbours whenever possible.

“We are finally teaching at satisfactory standards,” said Shaku, installing a protective visor over his mask.

“We have to catch up,” warned one of his colleagues, Noko Matloa. “Our clock is ticking.”

For the students’ return, Winnie Mandela Secondary School was divided into 14 classes, compared to the usual six.

By 9:30 am, all of the students were finally in class. A total 234 students out of 263 enrolled attended on Monday.

Only two students were sent home: the first had a cold and the second was 38 weeks pregnant.

“Today you’re going to learn a new way of life,” the headmaster told the students.

“No hugging, no shaking hands, no kissing,” said one teacher.

“As schoolchildren, we are not good at social distancing. We like touching each other,” said Delin Walend.

In one classroom, students lowered their masks to chat.

One student, Mandla Masinga, asked about the logic behind reopening schools when the pandemic is expected to peak in South Africa in a few weeks’ time.

The country has the continent’s highest number of confirmed coronavirus cases, with 48,285 infections and at least 998 deaths recorded to date.

“It’s confusing,” he said. “When the infections were low, nobody was expecting to be out of school. But now that the number of infections are higher, we are back at school.”