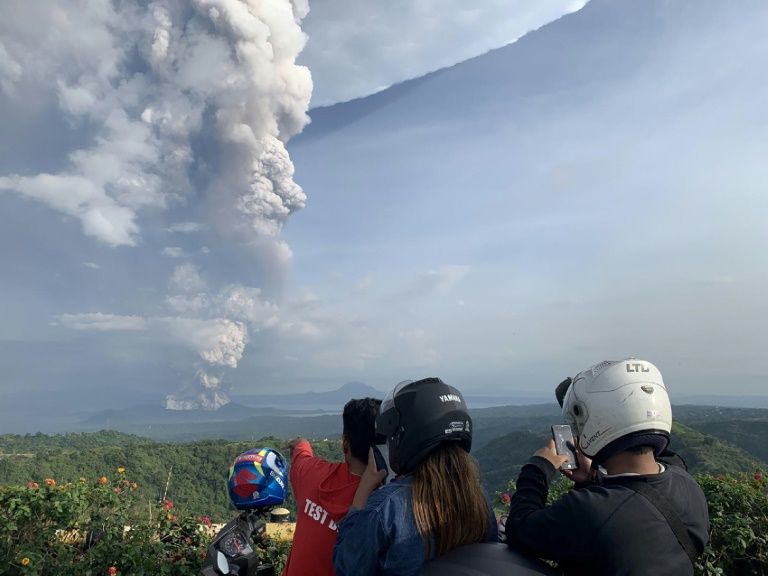 Philippine authorities warned Sunday a volcano near the capital Manila could erupt imminently, hours after it sent a massive column of ash skyward that grounded flights and coated towns across the region in fine dust.

Thousands of people living near Taal volcano, a popular tourist attraction set in the centre of a picturesque lake, were evacuated from their homes as it spewed ash, rumbled with earthquakes and lightning exploded above its crest.

A “hazardous explosive eruption is possible within hours to days”, the nation’s seismological agency warned, adding that the ash could pose a risk to aircraft.

Aviation officials ordered a suspension of flights in to and out of the capital’s Ninoy Aquino International Airport, after the ash cloud was reported to have reached 50,000 feet (15,000 metres).-

Government seismologists recorded magma moving towards the crater of Taal, one of the country’s most active volcanoes located 65 kilometres (40 miles) south of Manila.

A kilometre-high column of ash was visible and several volcanic tremors were felt within the vicinity of the volcano, which is popular among tourists for its scenic view.

The local disaster office said it had evacuated over 2,000 residents living on the volcanic island, which lies inside a bigger lake formed by previous volcanic activity.

Solidum said officials will also order the evacuation of people living on another island nearby if the situation worsens.

“Ash has already reached Manila… it is dangerous to people if they inhale it,” he told AFP.

Earthquakes and volcanic activity are not uncommon in the Philippines due to its position on the Pacific “Ring of Fire”, where tectonic plates collide deep below the Earth’s surface.

In January 2018, Mount Mayon displaced tens of thousands of people after spewing millions of tonnes of ash, rocks, and lava in the central Bicol region.