The Times of Earth, International Edition
0
207 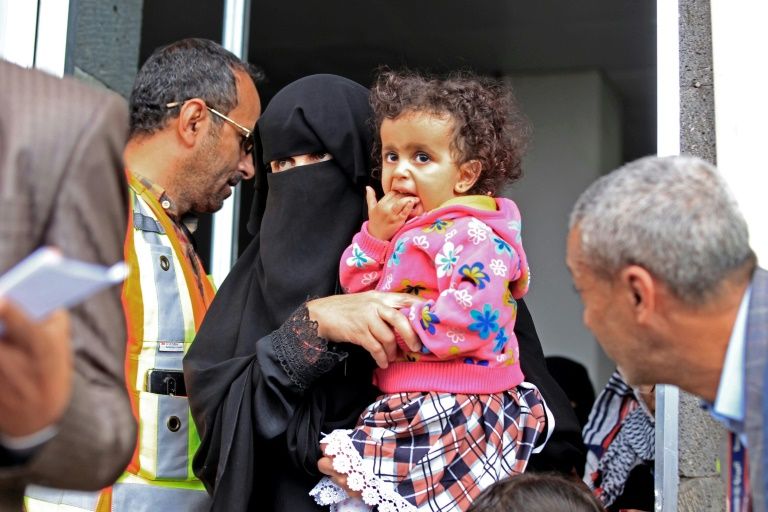 Yemeni children in critical need of medical care were evacuated Monday from the rebel-held capital Sanaa, in what the United Nations hopes will be the first of many “mercy flights”.

Seven young patients and their relatives flew out of Sanaa airport, which a Saudi-led coalition supporting the embattled Yemeni government has kept closed to commercial flights since 2016.

The UN-marked plane later landed in the Jordanian capital Amman, where passengers were placed in buses which immediately ferried them to hospitals, an AFP photographer said.

“This is the first of what we hope will be a number of flights in the medical air bridge,” UN Resident Coordinator for Yemen Lise Grande told AFP before the plane’s departure.-

She said more patients and their families would travel to Jordan and Egypt in coming days, as part of an evacuation programme which took months to negotiate.

“All of us feel today that this is a major breakthrough and an indication of hope out of Yemen.”

Yemen’s internationally-recognised government has been fighting Iran-backed Huthi rebels since they seized control of the capital in 2014.

In November, the Saudi-led coalition — which intervened on the government’s side in 2015 and controls Yemen’s airspace — said patients needing medical care would be allowed to fly out of Sanaa.

The move was a confidence-building measure aimed at ending the five-year war, which has killed tens of thousands of people and displaced millions in what the UN says is the world’s worst humanitarian crisis.

The lauch of the “air bridge” could be a step towards fully reopening Sanaa airport, a key demand of the Huthis and one issue being pursued in UN-led mediation.

British charity Save the Children hailed the evacuation programme as a “vital lifeline” for thousands of children needing medical care.

It also urged “all stakeholders to open Sanaa airport to commercial flights as well, so that medicines, medical equipment and other goods can come into the north of the country by air”.

Grande said the youngsters on the plane were suffering from serious conditions including cancer and kidney failure.

“These are heartbreaking cases,” she said.

“It is clear there are literally thousands of patients who haven’t received the treatment they need because of the blockade… With the first flight, we’ve opened that door.”

One of the children on Monday’s evacuation flight, Abdullah Abed, is in urgent need of a kidney transplant, his father told AFP.

“We are overjoyed,” Abed Ali Murshid said. “Today is the start of the air bridge that we have been waiting for two years.”

He added many people in Yemen suffered from “severe diseases” and needed to travel.

“The UN must operate the air bridge regularly, send abroad patients suffering from diseases, open Sanaa airport, and end the blockade of Yemen,” he said.

The Huthis on Sunday criticised the plan as inadequate, saying as many as 32,000 patients with serious conditions were waiting to sign up for medical evacuations.

A World Health Organization (WHO) spokeswoman told AFP that three more flights have been scheduled for February 4, 5 and 7, bound for Amman and Cairo.

For Ayman Abdullah, whose son suffers from a spinal injury, Monday’s move was a “positive step and a good sign” for Yemen.

Ali Salah, whose son has a severe shoulder injury, also welcomed the step before he boarded the flight to Amman.

“We have been waiting for a year and six month to get my son the medical treatment he needs,” he said.

Patients awaiting evacuation include “women and children who suffer from conditions such as aggressive forms of cancer and brain tumours, or who need organ transplants and reconstructive surgeries,” the WHO said in a tweet.

The Norwegian Refugee Council said thousands of Yemenis had been handed a “death sentence” when the coalition closed Sanaa airport as part of an anti-Huthi blockade.

“Today’s move comes too late for thousands of Yemenis who died waiting to leave the country for urgent life-saving care,” said Mohamed Abdi, the NRC’s country director for Yemen.

“We hope that these medical flights will save the lives of other Yemenis. Many more are still waiting to get the healthcare they need.”

The launch of the evacuations comes despite a deterioration in Yemen’s conflict, with fierce renewed fighting around Sanaa despite a period of calm.