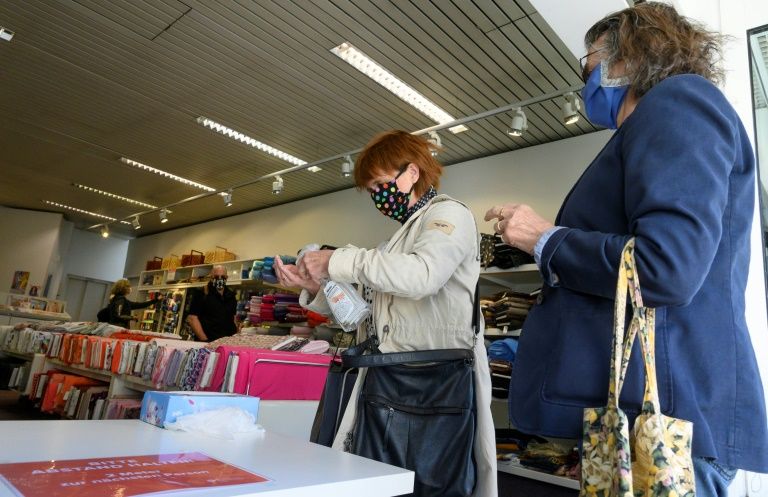 Germany, which has been hailed for keeping fatalities low despite a significant number of cases, allowed smaller shops to reopen in some regions (AFP Photo/THOMAS KIENZLE)

Germany and other parts of Europe took tentative steps to ease lockdown measures on Monday but officials warned the battle against the coronavirus pandemic was far from over.

Some shops reopened in Germany and parents dropped their children off at nurseries in Norway as tight restrictions in place for weeks were lifted in parts of the continent.

After being hit hard by the virus that first emerged in China late last year, Europe has seen encouraging signs in recent days, with death rates dropping in Italy, Spain, France and Britain.

The hope is tempered by fears of new waves of infections, warnings that life will not be back to normal for many months and deep concern over the devastating impact the virus is having on the global economy.

But even the smallest return to normality was welcome.

In the German city of Leipzig, fashion store owner Manuela Fischer said she was “incredibly happy” to be welcoming shoppers again.

In Norway, Silje Skifjell dropped off her boys Isaak and Kasper at a nursery in the north of the capital Oslo.

“He was so excited we had to leave the house early to come here and see the other children,” she said of four-year-old Isaak, her eldest.

“I almost cried, he was so happy to see his friends.”

Governments around the world are mulling how and when to ease lockdowns that have kept more than half of humanity confined to their homes.

The virus has so far infected more than 2.3 million people globally and killed roughly 165,000, with nearly two thirds of the victims in Europe, according to an AFP tally.

Germany, which has been hailed for keeping fatalities low despite a significant number of cases, is allowing smaller shops to reopen in some regions from Monday.

Larger shops and those in major German cities will open later as part of an attempted phased return to a more normal existence that will also see some students go back to school from May 4.

But officials are keeping a watchful eye, with Chancellor Angela Merkel saying Monday she is “greatly concerned” that virus-fighting discipline among the German public may ebb.

Hard-hit Spain, where a nationwide lockdown has been extended, also said it would ease some restrictions to allow children time outside.

Spain on Monday recorded 399 coronavirus deaths in the last 24 hours, its lowest daily count in weeks, and authorities are starting to shut some makeshift facilities set up to relieve the overburdened health system, including a morgue at a Madrid ice rink.

France, which on Sunday recorded its lowest number of hospital deaths since March 23, also said a nationwide lockdown in force for a month was beginning to bear fruit.

“We are scoring points against the epidemic,” French Prime Minister Edouard Philippe said, adding a strong note of caution.

“To imagine that, because the situation has stopped worsening and is starting to improve, the epidemic is behind us, would be a mistake,” Philippe said.

In Australia, authorities in Sydney reopened three beaches for walking, running, swimming or surfing, while New Zealand announced that it will ease a nationwide lockdown next week, with Prime Minister Jacinda Ardern saying: “We have stopped a wave of devastation.”

And in the United States — the country with the highest number of deaths and infections — the governor of hard-hit New York, Andrew Cuomo, said the outbreak was “on the descent”.

Many governments are anxious to get their countries up and running again, with huge parts of their economies shut down, millions thrown out of work and economists warning of a second Great Depression.

Spain on Monday became the latest country to warn of unprecedented economic hardship, with the Bank of Spain saying the country’s economy could contract by a whopping 13.6 percent this year.

In the United States, which has the more than 759,000 confirmed infections and nearly 41,000 deaths, some are increasingly chafing under stay-at-home orders and are taking to the streets to protest.

Anti-lockdown demonstrations over the weekend drew hundreds of people in several states, including Colorado, Texas, Maryland, New Hampshire and Ohio.

Many waved American flags, and some carried weapons. But others stayed in their cars or wore protective masks.

President Donald Trump fuelled another bout of fury over the weekend by lending support to the protests against the lockdown restrictions — which medical experts say save countless lives.

In Brazil, President Jair Bolsonaro — who has repeatedly claimed the virus threat is overblown — joined hundreds of protesters in Brasilia who objected to state governors’ stay-at-home orders.

Brazil has the most infections in Latin America, a region where an AFP tally on Sunday showed total cases had surpassed 100,000 with nearly 5,000 deaths.

“Count on your president to do what is necessary so that we can guarantee democracy and what is most dear to us, our freedom,” Bolsonaro told the protesters.

Muslims in the Middle East and beyond are also preparing for a bleak Ramadan — the holiest month in the Islamic calendar — which begins later this week.

Mosque prayers have been suspended and iftar feasts cancelled in many countries.

Several countries’ religious authorities, including Saudi Arabia’s Grand Mufti Abdulaziz al-Sheikh, have ruled that prayers during Ramadan and Eid be performed at home.

“Our hearts are crying,” said Ali Mullah, the prayer leader at the Grand Mosque in Mecca.

“We are used to seeing the holy mosque crowded with people during the day, night, all the time… I feel pain deep inside.”