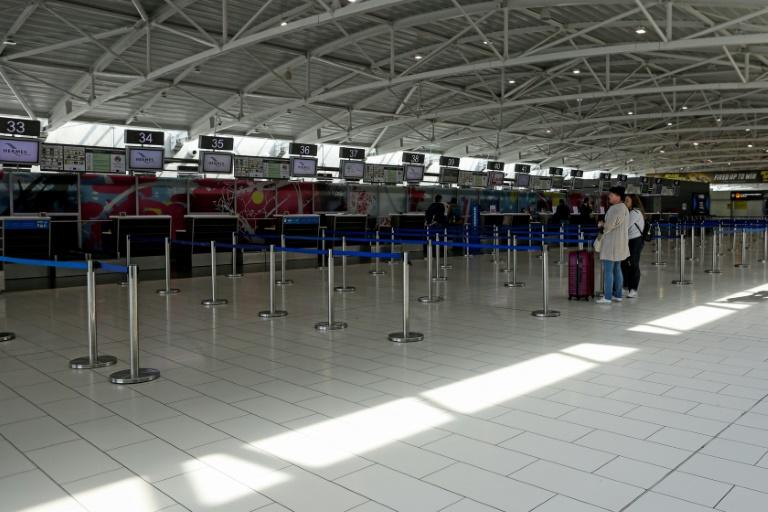 The check-in counters at Cyprus's main international airport, which have lain empty since March, are to remain shut for now in a blow for the island's economy (AFP Photo/Christina ASSI)

After two months of living in self-isolation, Cypriots were allowed to move around freely again.

Roads in the capital were noticeably busier than during the lockdown but with the island experiencing record temperatures for May of 43 degrees Celsius (109 degrees Fahrenheit) few pedestrians were out.

As the lockdown was lifted, businesses and shoppers were adjusting to a new normal of sanitation measures.

In reopened cafes, customers were seated outdoors with two metres (yards) between tables.

Some ate with plastic face shields still on, while waiters served them wearing face masks and plastic gloves.

But for many it was a welcome taste of freedom after two months of only being allowed to go outside for exercise or essential trips approved by text message in advance.

“It’s the first day they’re open so we’re just here to have coffee. We’re having fun… finally,” said Ben, a young man seated outside a cafe with a friend.

Some 32,000 more people returned to work as part of the government’s second stage out of lockdown.

Tens of thousands of children returned to the classroom as state-run schools resumed classes for most pupils.

A sample of both pupils and teachers underwent swab tests for the coronavirus on their first day back.

Cyprus activated the second stage of its draft timetable for ending the lockdown after the daily number of new infections remained in single figures throughout the first three weeks of May.

Virologist Dr Leontios Kostrikis, who is a member of the health ministry’s epidemiological monitoring unit, said he was “very satisfied” with the figures so far.

“The second stage is a make or break point for a full return to normalcy and for this reason we kindly ask you to keep up the good work with the same determination so that we are not forced to take backward steps,” Kostrikis told reporters.

Due to the better than expected figures, the government has decided to allow Cypriots access to organised beaches from Saturday, rather than June 1 as planned.

At present only swimming is allowed not sunbathing or any other leisure activity.

But the island’s two international airports in Larnaca and Paphos remain firmly shut for now, as do the crossing points to the breakaway Turkish-Cypriot north of the island.

The tourism sector is a key part of the Cyprus economy and the government has been under heavy pressure to reopen airports and hotels before the peak summer season.

The government has said it hopes to reopen airports gradually from mid-June with hotels to reopen two weeks after that.

But it has yet to issue any health protocols on how they will operate.

Indoor bars and restaurants will also remain shut until the third phase out of lockdown scheduled to start from June 9.

Business owners said they were impatient to make up for lost earnings.

“I want my work back and my life back,” said Sakis Siakopoulos, a restaurant owner on Ledra Street, the capital’s busiest pedestrian thoroughfare.

Siakopoulos said he had lost 11,000 euros per month in revenue while his restaurant was closed, but with the Cyprus government paying 60 percent of his wage bill he was able to retain his staff.

Limited restaurant seating meant it would be impossible for him to run a profitable business, he said, and the European Union would have to do more to support businesses like his.

The government has said crossing points through the UN-patrolled buffer zone that divides the government-controlled south from the breakaway north will not reopen before next month.