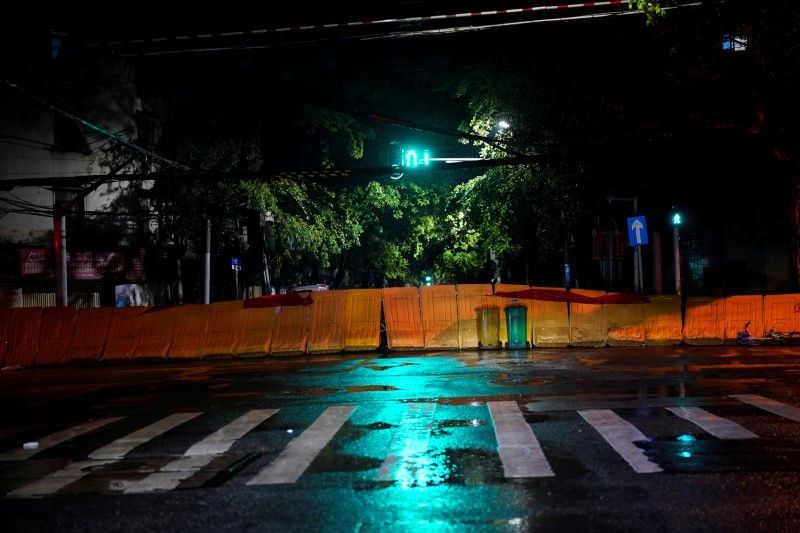 A street blocked by barricades is seen in Wuhan. REUTERS

China on Saturday reported no locally transmitted coronavirus infections for the previous day and a small reduction in new cases involving travellers from overseas, as new restrictions on the entry of foreigners kicked in.

Effective Saturday, China has temporarily suspended the entry of foreign nationals with valid Chinese visas and residence permits. The new restriction reflects worries in Beijing over the risk posed by so-called imported cases of the virus after widespread lockdowns within China helped to bring domestic transmissions under control.

A commentary in the Communist Party’s official People’s Daily newspaper on Saturday reflected the concern.

“At this time, we must be extremely vigilant and cautious, and we must prevent the post-epidemic relaxation from coming too soon, leading to the loss of all our achievements,” it said.

China’s National Health Commission said on Saturday that 54 new coronavirus cases were reported on the mainland on Friday, all involving so-called imported cases. There were 55 new cases a day earlier, one of which was transmitted locally.

The total number of infections for mainland China now stands at 81,394, with the death toll rising by three to 3,295, the commission said.

Hubei province reported no new cases, and three new deaths. The province of 60 million, where the virus was first detected, has recorded 67,801 coronavirus cases and 3,177 deaths.

The number of confirmed cases of coronavirus in the United States rose by at least 16,000 on Friday to nearly 102,000, the most of any country.