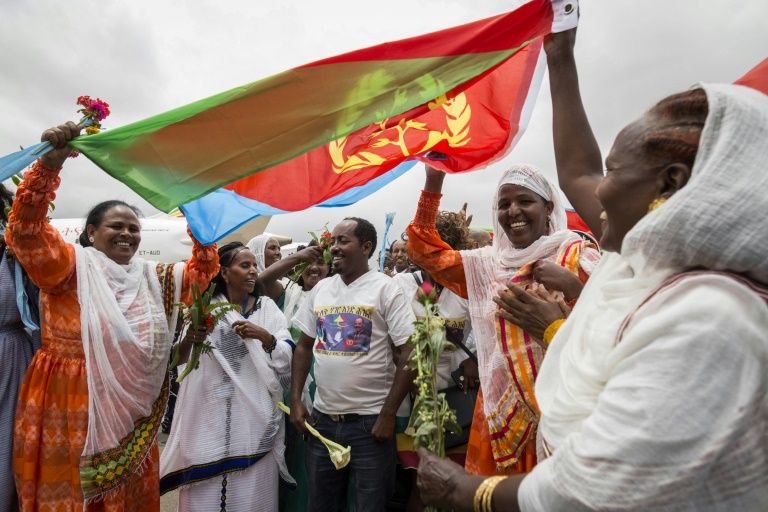 Eritrean taxi driver Mihreteab recalls brimming with hope in July 2018 when his country reached a peace agreement with neighbour and longtime foe Ethiopia.
But a year and a half later, that hope has given way to disenchantment.
“I don\’t see any changes so far. People are still in jail and life is the same,” he said while waiting for passengers on a main avenue in Asmara.
Like other ordinary Eritreans who spoke to an AFP journalist during a rare visit to the famously closed-off country, Mihreteab asked that his full name not be published.
On the streets of the Eritrean capital, he was far from alone in feeling disillusioned.
“I like my country and I think you are also enjoying your stay. However, life is still the same for me,” said Tekie, a small trader who sells home appliances at a market in the city centre.
Eritrea and Ethiopia fought a deadly border war beginning in 1998 that claimed nearly 80,000 lives before a stalemate took hold in 2000 and lasted nearly two decades.
Last year\’s surprise peace deal remains the signature achievement of Ethiopian Prime Minister Abiy Ahmed and is the main reason he received this year\’s Nobel Peace Prize.
During the whip-fast rapprochement that followed, embassies reopened, flights resumed and meetings were held across the region.
But progress has since stalled and the land border between the two nations is once again closed.
Inside Eritrea, speculation that peace would spur reforms and ease years of repression has so far proved misguided.
The regime of Isaias Afwerki, the only president Eritrea has ever known, has given no sign of any kind of political opening, and the situation may in fact be getting worse.
In June, officials ordered the closure of Catholic-run health centres after church leaders published a letter expressing concern over the lack of reforms.
There are also reports of a new wave of attempts to nationalise private schools.
Nevertheless, ordinary Eritreans appear to appreciate Abiy\’s peacemaking efforts, and the Ethiopian leader seems genuinely popular on the streets of Asmara.
“He\’s a good man and really deserved the Nobel,” said Nigisti, a handicrafts vendor.
-\’One day life will change\’-
Even if the hoped-for benefits of peace haven\’t materialised, some Eritreans remain optimistic.
Nazret, who sells cereal in Asmara, is among them.
“The peace deal gives me hope that one day life will change. Peace is important for us,” she said.
Buying vegetables nearby, Netsunet said she also chose to focus on the positive.
Born in Ethiopia in 1982 to parents of Eritrean origin, she was forced out during the war and has spent half her life in a country she does not consider her own.
She prefers not to dwell on the moment she was “separated by force” from Ethiopia, and said she is grateful that now she has an opportunity to return.
“At least today, we can fly to see each other,” she said. “I plan to visit my old neighbours in Ethiopia in December.”
Eritrean officials argue that it\’s wrong to suggest nothing has changed in Eritrea.
Instead, they say the pace of reform has been deliberately slow to preserve their country\’s sovereignty.
Last week, Asmara hosted a summit for the Addis Ababa-based United Nations Economic Commission for Africa that drew delegates from across the region.
According to Mohammed Gumhed, a researcher at the Eritrean foreign ministry, this kind of event “could not have happened before the peace deal”.
-A \’new chapter\’?-
During his opening remarks at the conference, Eritrean Foreign Affairs Minister Osman Saleh Mohammed declared that a wave of hope and unity was washing over the Horn of Africa after decades of conflict.
He emphasised Eritrea\’s progress in expanding access to health services, water, education and transportation.
Addressing criticism of Isaias\’ iron-fisted rule during a briefing with conference delegates, Ghetachew Merhatsion, who works in the president\’s office, said Isaias was merely respecting the will of the people.
“We see multi-party systems in many African countries and that is good for democracy. However for now Eritreans have decided to have only one party and we are making progress,” he said.
Alem Kibreab, director-general at Eritrea\’s Ministry of Energy and Mines, held out hope that the peace deal could change how the world sees Eritrea and how international investors engage with the country.
“Who would invest when there is no peace? Now a new chapter is beginning,” he said.
Asked about progress on reopening the two countries\’ land border, Ambassador Tesfamicael Gerahtu, an official at the Eritrean foreign ministry, predicted that the main crossings would soon be reopened, though he said this would have to wait until “implementation of the agreement is finalised”.
“The dialogues are at an advanced stage and we hope it will soon be declared,” he said.
SOURCE: AFP
Previous Article

US judge awards $180M to Post reporter held by Iran